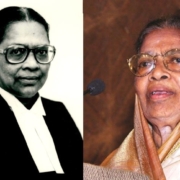 Justice Fathima Beevi was the first woman to be appointed a Supreme Court Justice of India. She was also the first Muslim woman in Higher Judiciary and the first woman to become a Supreme Court Justice in an Asian country. The significance of this achievement is best described in her own words, ‘I have opened the door”, she said in an interview with the Scroll. By being appointed to the Supreme Court she paved the way for women to pursue careers in a male dominated judiciary. Justice Fathima  Beevi went on to become the Governor of Tamil Nadu on in 1997. Fathima Beevi is always  be looked up to as a role model to tackle gender imbalance in the legal profession.