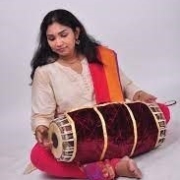 A percussionist, singer and composer, Charu Hariharan is a multi-faceted musician She was the first female to win the CCRT scholarship for Mridangam and started performing for concerts since the age of 14. She started travelling abroad since 2005, accompanying her mother on Khanjira for a tour in Lagos, Nigeria. Since then, she has been collaborating with various artists around the globe. Charu received a scholarship to participate in the world music camp in Sweden called the ‘Ethno Sweden’ and she was one of the 6 participants among 110, and the first Indian to be chosen for the ‘Ethno on the Road’ concert series. She was invited to participate in a Youth Music Exchange Project in Sweden in 2012 and was mentored by the Folk Music Maestro Ale Möller. She is a member of the World Folk Ensemble band ‘Varldens Band’ consisting of 14 musicians from 6 different countries and have been touring extensively in Sweden, Norway, Denmark, UK and Scotland since 2013. The band has been nominated twice for the World and Folk Music Awards,