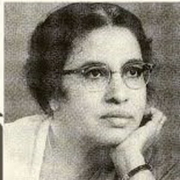 Justice Anna Chandy was India’s first female judge and the first woman in the country to become a High court judge. Anna chandy has been described as ‘first generation feminist’. She contested from Shree Mulam Popular Assembly and was elected for the term 1932-34.Anna chandy became the first woman judge in the Indian district court in 1937. She was the 2nd woman of the world who reached to the high court judgeship in 1959. She became the founder and editor of the journal (Shreemati) in which she  supported the women’s rights.. This was the first women’s magazine in the Malayalam language She was then appointed as Kerala high court judge and remained in office till April 1967. Post retirement, she served on Law Commission of India and also wrote her autobiography. In 1971 the Malayala Manorama serialised her autobiography which was subsequently published in Thrissur by Carmel Books in 1973 under the title Atmakatha. She passed away in 1996.

Healthy Women for a Healthy Nation
Scroll to top